Throw Away the Crutches of Reasons, Excuses and Explanations! 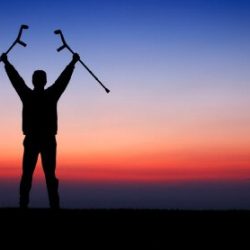 There aren’t nearly enough crutches in the world for all the lame excuses. ~ Marcus Stroup

We all make them or give them. They sound good (at least to us) and other people accept them (or they seem to).

But lately I’ve been present to how lame and useless reasons, excuses and explanations are, especially the ones that justify not taking action on something that matters.

And If I’m BRUTALLY honest about my own reasons, excuses and explanations for not taking action, I have to admit they are mostly a cover-up for being lazy. Or scared. Or both.

That’s not pretty to admit.

But as Dr. Phil would say, you can’t change what you don’t acknowledge.

Are you in the habit of using excuses, reasons and explanations to avoid going after what matters to you? If so, I invite you to take a look at what’s REALLY standing between you and your biggest dreams – the ones that would really make a difference in the quality of your life. What are your favorite reasons, excuses and explanations?

Here are a just a few examples I’ve recently heard (or used):

One way to escape the rat race of excuses, reasons and explanations and create a fresh start is to take yourself off of automatic pilot long enough to indentify and question your usual pattern of thinking and justifying. Ask yourself one or more of the following questions instead:

Asking quality questions will generate an energy shift into curiosity, which is a more playful, powerful and productive space from which to operate. And I’ll bet you’ll start taking action on your biggest and most meaningful dreams.

Are you ready to take action on your BIG, JUICY DREAMS and GOALS? Call Coach Sue at 949-212-4345 or email [email protected] to schedule a complimentary “Get Acquainted” coaching session.

How to Stay Happy on the Path from “Go” to Goal