One Fun Secret for Pushing Through Obstacles 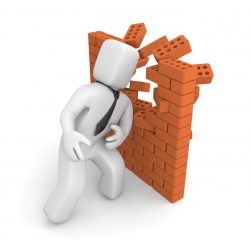 “Where is the electric socket for possibility, the access to the energy of transformation? It’s just there over the bar line, where the bird soars. We can join it by finding the tempo and lean our bodies to the music; dare to let go of the edge of ourselves…participate! ~ Benjamin Zander

I doubt if it’s a surprise that one of the most daunting challenges we face on the path to achieving goals that matter is pushing through obstacles.

I love this story from the book “The Art of Possibility” co-authored by Benjamin Zander. He tells about a music student he coached to prepare him for an audition.

Zander said the student was technically proficient with his instrument but lacked “flair”. With coaching, the student finally pushed through that obstacle and gave a passionate performance. Mr. Zander told the student that if he performed like that, he would ace the audition.

The student called later to inform Mr. Zander that he had not aced the audition. He admitted he played the piece with technical proficiency rather than with emotion.

When Mr. Zander tried to console him, the student interrupted to say there was more to the story. He’d been so angry about being turned down that he said to himself, “Fuck it, I’m going to Madrid to play the audition for the principle cellist in the orchestra there!”

He won that position at twice salary of the first job. And guess what? For the second audition, he played the piece with passion.

That story led Mr. Zander to design a distinction for pushing through obstacles. He calls it going BTFI – “Beyond the Fuck It!”

I love that story and I love that distinction! I love it because it’s simple – and simple is elegant.

You and I know what it means to go BTFI. No additional words are necessary. I’ll bet you can name the times in your life when you’ve done it. And you can remember how you felt afterward.

Like Tim Robbins’ character, Andy Dufresne in the Shawshank Redemption when he emerged from the tunnel, raised his arms and embraced the sky!

But how often do we give up too quickly? How often do give up after the first try or first failure? We aren’t willing to go BTFI. Pushing through obstacles requires your inner warrior to show up and take on your arch enemy whose name is Stinkin’ Thinkin’.

Whether you are facing a career transition, a relationship challenge, a health crisis, or financial setback, ask yourself what’s possible. What do you see for yourself “beyond the fuck it?”

What obstacles would you have to push through to get there? What would it feel like to stand over there – daring to go past the edge of yourself?

Where are you facing obstacles in the important areas of your life? Are you ready to go BTFI and stand victorious on the other side? Join me for January Jumpstart 2014: Creating Goals that Matter starting Tuesday, January 28, 2014. Six sessions could take you past the edge of yourself – beyond the place where you stop – to soar on the wings of ecstasy.