Are You at a Career Crossroad? Don’t Just Stand There! 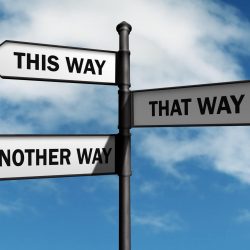 What if you were wrong? What if everything you ever believed was a lie? What if you missed your opportunity because you didn’t know your worth? What if you settled on familiar, but God was trying to give you something better? What if you decided not to go backwards, but forward? What if doing what you have never done before was the answer to everything that didn’t make sense? What if the answer wasn’t to be found in words, but in action? What if you found the courage to do what you really wanted to do and doing it changed your whole life?

One of my favorite movies is Castaway. I particularly love the ending scene where Tom Hanks’s character is standing at a crossroads looking in all directions trying to figure out which way to go.

He’s come through just about the worst experiences life could throw at one human being. After losing it all, nothing remains of his former life. But, he survived.

At a Career Crossroad, Every Direction Holds Endless Possibilities

Sometimes I wish for a sequel so we can find out what he does next. What will he choose?

You can tell by the expression on his face is that he’s not going to turn back and he’s not going to stand at that crossroad forever. He may not have the answer about what his future holds, but it looks like he’s feeling pretty good about whatever lies ahead. The possibilities are limitless.

What Will You Choose?

Most of us will luckily never face a crossroad that turns our entire lives upside down. But it’s likely that we will face at least one crossroad where we know that going forward, our lives are never going to be the same.

It might be a career crossroad, a health crossroad, a relationship crossroad, or a financial crossroad. When it happens, the worst thing you can do is stand still or spin in circles trying to pick a direction. To survive or thrive, you’ve got make a choice and step forward.

There isn’t a Right or Wrong Direction

I’ve recently spoken to three people who are each facing a career crossroad. They each think they “should” feel happy and satisfied with the route they are currently on, but they don’t.

They feel a bit lost and confused. They know that they no longer want to do what they’ve been doing. But they don’t know where to go next.

The challenge they face at their career crossroad is trying to figure out what is at the end of each road before they choose a direction. They are hoping I can answer that question for them.

They already have the power to choose a direction. They just need support and coaching until they can give themselves permission to do it.

They wouldn’t be satisfied with my answer anyway. They’ve already been down a route chosen for them by the culture, gender, or well-meaning caregivers who focus on “practical”, based on what has worked in the past. Now they need to choose from their own inner intelligence about what’s right for them.

These days, you’ve got to think in new ways. If you are young, the idea of spending the next 10, 20, or 30 years in a cubicle, doing what you are doing now, is not only impractical, it feels like a death sentence.

It’s not that much different if you are older. Baby Boomers who can’t or don’t want to retire tell me that spending another 10 or 15 years chained to a cubicle feels equally depressing.

In this day and age, the routes that have worked in the past for creating a career are becoming less and less viable. In that sense, we are all facing a career crossroad.

You can think of that as being scary. Or you can embrace it and treat yourself to an incredible adventure of discovery, whether you are a Baby-Boomer, Gen X-er, Gen Y-er, or Millennial.

No matter what generation you come from, you want the same thing.

If you feel like you’re a square peg trying to fit into a round hole, relax and embrace the idea that you are at a career crossroad. Embrace the idea that, like Tom Hanks’s character, you are heading into new and uncharted territory. No one has been here before.

Embrace your inner intelligence and creativity and choose a new direction. You can’t get it wrong.

Your road may not be straight. You may encounter switchbacks, detours, and a pothole or two. Keep going.

You’ll figure it out as you go. You’ll get there. And when you do, you’ll look back on your journey with gratitude that you gave yourself the chance.